Messing around with electricity can be dangerous. While little zaps from low voltage wiring might just sting a little, touching live wiring in an electrical panel can seriously injure or kill you. Unsafe electrical systems can also cause fires. Electrical panels are grounded to make them safer when something goes wrong by making sure that the circuit breakers in your panel function properly.

How can you tell, and what do you do, when an electrical panel isn’t grounded?

An easy way to tell if a building is grounded is if the power outlets have two prongs instead of three. To add grounding to an existing panel, drive a ground rod into the ground and connect a grounding wire to the main electrical panel. Install new power outlets that have a continuous grounding path back to the grounding rod.

In this post, I’ll further explain why every electrical panel should be grounded, what a ground even does, and how to add a ground to an existing panel.

How Stuff Works describes the Earth as one of the wires in an electrical system. In modern electrical systems, there are typically three wires: a hot, a neutral, and a ground. Electrical current flows from the hot wire through a powered object, like an appliance or piece of equipment, then flows back through the neutral wire. The grounding wire does not normally conduct electricity.

If you touched the metal, you would be shocked. With a ground wire, the earth would draw infinite current from the utility company. When the current exceeds the rating of the circuit breaker, the breaker will trip and cut power to the circuit.

You can test to see if the power outlets in your home or building are grounded with an outlet tester. You can plug the tester into the outlet to see if you have an open or hot ground. These testers will only test the ground at the outlet. In order to tell if your panel is grounded, you will have to rely on what you can visibly see. If you see any loose wires or conductors, you should repair any connections.

Can a Ground Wire Shock You?

Ground wires are installed in power outlets, on electrical panels, even in appliances, to help prevent injury if a fault occurs. A fault can happen if something causes a current to surge through the electrical wiring, such as a faulty appliance, damaged wiring, or even a lightning strike or power surge.

Normally, when the grounding wire is properly installed, it will not shock you if you were to touch it. Even if a fault occurs in the system and the ground is properly connected, it still wouldn’t shock you.

When one of these wires is damaged or an appliance breaks, the ground ensures that the circuit breaker in the electrical panel will trip, cutting power to the circuit and preventing fire or injury.

If you were touching a live wire when it faulted and there was no ground wire or the ground wire faulted, you would be shocked. Your body will act as the pathway to ground, causing the entire draw of the electrical current to run through your body. If the current runs through your heart, you could die.

When one of these faults surge through the electrical system, the current takes the path of least resistance down to ground. However, if the ground wire isn’t properly installed or damaged, anything touching the ground can become live. If you touch a ground wire that isn’t properly grounded, then again, your body will become the pathway for the current to reach ground.

How to Add a Ground to an Existing Panel

If your electrical system in your home or building was built prior to 1965, there’s a chance your power outlets aren’t grounded. Two prong receptacles in older homes aren’t grounded. The ground wire in newer wiring systems is connected to the third prong, providing a continuous pathway from the appliance all the way back to the electrical panel, then down to the ground rod.

If you have an older wiring system that uses what’s called knob and tube wiring, you should hire a qualified, licensed electrician to install a grounding system in your house The electrician will install the grounding rod and connect it with a grounding conductor back to your electrical panel. I really wouldn’t recommend trying this yourself.

You will also need to replace all the old two-prong electrical outlets with the newer three-prong outlets. This will mean that all the old knob and tube wiring will need to be replaced with newer non-metallic sheathed cable. This knob and tube wiring can be especially dangerous since it was typically unsheathed, or uninsulated, so if you touch a loose wire you could get shocked.

If you have an electrical system that’s ungrounded, you may find that you can’t plug a three-prong cord into a two-prong outlet. While there are adapters that exist that allow you to plug in your appliance, these adapters can be very unsafe. Your adapters really need to be installed very precisely in order to work properly. Worth noting, if they’re bumped, frequently moved, or otherwise damaged, they can prove completely ineffective at grounding your appliance.

Another option includes replacing two-prong outlets with GFCI outlets. GFCI stands for ground fault circuit interruption. The receptacle detects the imbalance of current. There’s an induction coil around the hot and neutral wires. If it ever detects a current in one wire that isn’t in the other wire, that means that the current has gone to ground and it’ll pop a circuit breaker inside the outlet.

Without a grounding wire in the electrical system, it will only detect if the current found another path to ground, such as your body, or if the current flowed through a metal pipe or water.

If your electrical panel isn’t properly grounded, the safest solution is to install a grounding system. Grounding systems have been required by code since the 1960s and therefore, if your system doesn’t have a ground then it doesn’t comply with current codes. Many insurance agencies won’t insure buildings that don’t have grounding systems due to how unsafe they are.

Hopefully, after reading this, you now have the confidence to know whether your electrical panel is grounded or not and what to do about it. 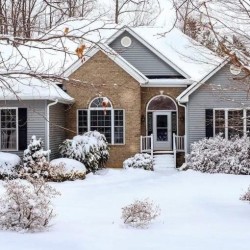 Hey there! I’m Bob Barocas, the Home Repair Ninja, and this is where I love discussing DIY home repair and remodeling tips we all wish we knew before starting a job. I created this blog to share everything I've learned over the years, so you can hopefully get it all right the first time without the stress or headache. The Home Upgrader will literally save you thousands on your next remodeling project. It’s a manual that leaves no stone unturned and was specifically written for the cost-conscious who want a beautifully upgraded home or room without breaking the bank.